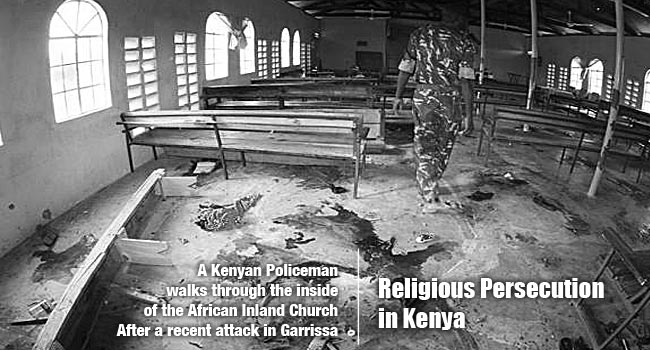 Kenya has had its fair share of what can be deemed as religious persecution. On 27th August 2012, following the assassination of a terror suspect Sheikh Aboud Rogo in Mombasa town, various churches were on the receiving end of the retaliatory attacks that were carried out by his fervent supporters who had been angered by his death. Churches were torched, destroyed and vandalized. Christian leaders came out to strongly condemn these attacks, pointing out that this was a planned attack on churches in a town whose occupants were largely Muslims. It was alleged that Sheikh Aboud had taught and considered Christians as infidels.

9th May 2012, two Christian preachers are lynched and burnt to death in Mombasa by what was alleged to be a staged attack by Muslims against the preachers who were carrying out evangelical activities in Changamwe area. Evangelical churches reproached these activities. Elsewhere, Christian leaders have voiced that the local municipality in Mombasa had pushed them in a corner and denied them land to erect churches, while Islamic extremists mocked the Bible and preached against Christianity.

It seems as though the terror attacks have taken a different turn, targeting congregants gathered in churches. The police force has been deploying officers to man churches especially in North Eastern Province. In the month of May, a similar occurrence was witnessed after a grenade was hurled inside a church in Nairobi's Ngara area on Sunday morning, killing one person and wounding fifteen others. It is unfortunate that the latest Al-Shabaab's stance is to try and wage a religious war by rallying the people of Somali to battle against the Kenyan forces who they now accuse of spreading Christianity in a country which Islam is prevalent. The KDF deny this accusation.

The most recent report shows police have today, 14th September 2012, recovered a cache of arms in Nairobi's Eastleigh estate, that were allegedly meant to be used for terror attacks on Sunday in the city. The reports further state that the terror attacks were targeting innocent Kenyans during Sunday's Church services.

The controversy of religious intolerance emerges to a substantial extent and this should not be overlooked as it may be the small leak that might sink a great ship. The issue, as earlier stated is not in Africa only and there have been victories experienced in the war against persecution. The most recent victory was that of Pastor Youcef Nadarkhani, an Iranian pastor who has been released from prison where he was held for over one thousand days! However this does not mean that it is the end of the struggle. There are many other people who are suffering in prisons and others in hiding because of their choice of religion. It is for this reason that an initiative dubbed 'The 48-Hours for Religious Freedom' has been organized to promote religious freedom and to raise awareness on the same.

Christians Under Attack In Mombasa

Tuesday, 20 January 2015
Mombasa residents were left in shock and confusion when gunmen attacked a church in the Majengo area. The residents of Majengo are now living in fear... Read More...
Religious Persecution in Uganda

Sunday, 08 February 2015
Uganda, an East African country is known as the world's second most populous landlocked country with about 84% of this population being Christians.... Read More...
Religion Question on War on Terror