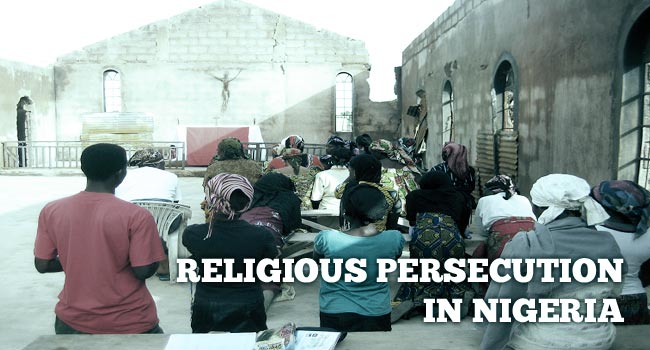 The constitution of Nigeria stipulates that Nigeria is a secular state, it further guarantees religious freedom. However, this freedom has been abused severally in the country which has an estimated population of about 155-160 million. Nigeria, Africa's most populous country, is composed of Christian (51.26%), Muslim (45.12%), Ethno religionist (3.31%), Non-religious (0.30%), and other (0.01%) religious groups. The Northern divide largely hosts the Muslim population while the southern divide mainly comprises of Christian populations. The northern parts have witnessed a series of spontaneous sectarian attacks orchestrated by the Islamic and Christian groups. The repeated religious attacks in Nigeria are devastating and have had heart wrenching consequences including the brutal deaths, injuries, destruction of churches and the displacement of many.

Reports of prejudiced treatment towards Christians by the Northern ruling elite have been testified. The spasm of violence and bloodshed in the northern parts of Nigeria has reached alarming levels. Instances of violence begetting violence where Christians have killed Muslims and vice versa have escalated.

The presidency and the governance structure have also not been spared of the profound tension that exists between the Christian and the Muslim groups. After the April 2011 presidential election, protests over Christian Goodluck Jonathan winning quickly turned into ethnic and religious violence that saw hundreds killed. The Boko Haram, a radical Islamist group, which translates as "Western education is sin," called for the conversion of President Goodluck Jonathan or his resignation. Although Jonathan won the last election by a landslide, more than 800 people were killed and dozens of churches torched during three days of rioting after the election result was announced. Boko Haram has since threatened to cleanse northern Nigeria of its Christians by bombing their churches and attacking their congregations.

It is believed that Boko Haram has been attacking Christians in the north to incite sectarian violence between Muslims and Christians in order to press for the separation of the Muslim-majority north from the Christian-majority south.

The Boko Haram, are believed to have killed more than 690 people across the country this year alone.

Some of the recently reported cases are as follows:

The government of Nigeria has been on the receiving end in the midst of all these attacks as it has been accused for failure/inability to combat the attacks taking place.

Sunday, 23 September 2012
Kenya has had its fair share of what can be deemed as religious persecution. On 27th August 2012, following the assassination of a terror suspect... Read More...
The Constitution Must Treat All Religions Equally

Tuesday, 20 April 2010
We will be a better world when each religious group can trust its members to obey the dictates of their own religious faith without assistance from... Read More...
Churches Burnt In Tanzania

Wednesday, 30 May 2012
Muslim extremists have burnt two churches in Zanzibar over the weekend. This was in protest over the arrest of their senior members of their UAMSHO... Read More...
Religious Persecution in Tanzania

Tuesday, 13 November 2012
Religious leaders and sociologists estimate that the Christian and Muslim communities in Tanzania are approximately equal in size, with each... Read More...