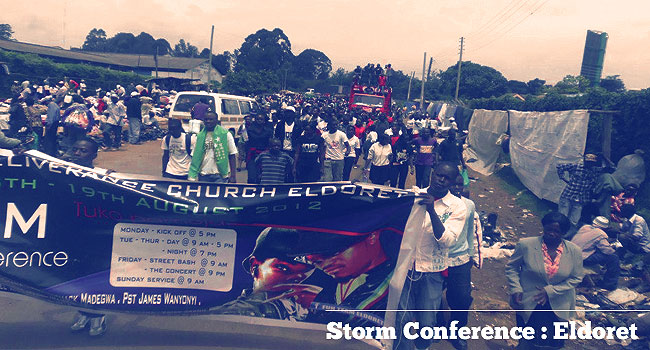 EACLJ joined thousands of young people in Eldoret for the Storm Conference under the theme "TUKO PAMOJA", STORM conference brought together young people from across the nation to Eldoret town, Uasin Gishu County for a time of worship, teaching, reflection and encouragement. EACLJ was invited to offer civic education on matters affecting the youth, including their rights as in the Constitution.

EACLJ was also requested to teach on the Election Offences as captured in our electoral Laws.The young people resolved to have a peacefull general election come March 4th, 2013.Eldoret was the center of post election violence in 2007/08.

EACLJ will also explain in detail about the Linda Uhai Campaign.

STORM conference themed "Tuko Pamoja" organized a march in the streets of Eldoret town to pass the message of peace as the country approaches the elections period.

Storm Night was a musical concert climaxing the Storm conference. Over 2,000 young people were in attendance to enjoy the songs and the dances for the famous gospel artistes and dance groups. The young people unanimously agreed to say NO TO TRIBALISM and not to be used by politicians to perpetrate violence during and after elections.EACLJ joined the young people from Eldoret town for a time of worship and reflection on the future of our country Kenya under the theme"TUKO PAMOJA" meaning "WE ARE TOGETHER."