Celebrating the Day of the Girl Child 2017 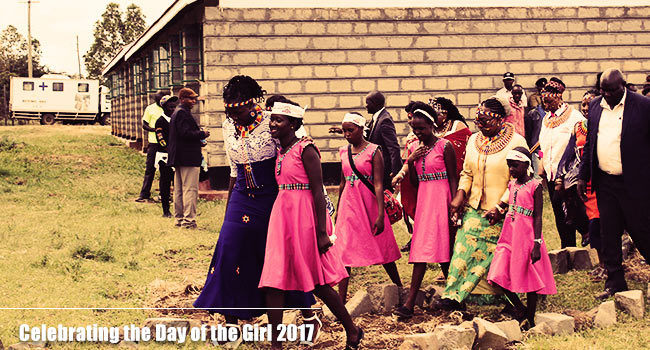 The International Day of the Girl is marked every 11th October, and the EACLJ has been taking part in celebrating with the Samburu Girls Foundation (SGF) since our partnership with them started. This year the theme was dubbed ‘Empower Girls: Emergency Response and Resilience planning’.

The event was organized by the Ministry of Public Service, Youth and Gender Affairs, under the State Department of Gender Affairs, Anti-FGM Board, together with leaders of Samburu County.

We received an invitation from the Ministry to be part of the event as stakeholders.

The event had many dignitaries in attendance, and among them was the guest of honor, Ms. Sicily Kariuki who is the Cabinet Secretary to the Ministry of Public Service, Youth and Gender Affairs.  She graced the event which was hosted at SGF Center in Loosuk Ward, Samburu County.  Ms. Sicily was honored to officially open the center’s dining hall, and together with the chairman of the Safaricom Foundation, Mr. Joseph Ogutu, they officially open four classrooms which had been built by the Safaricom Foundation. The girls also received tablets from the Huawei Company, which will go a long way in helping them to learn and familiarize with the digital world.

There were many speakers who addressed the issue of fighting for the rights of girls and women as a whole. Among them was EACLJ’s Ken Mbaabu. He started by appreciating the opportunity, and went ahead to explain our partnership with SGF and the contributions that we have made and continue to make, which have further strengthened our partnership.