More Terror Attacks and the Prevention of Terrorism Bill 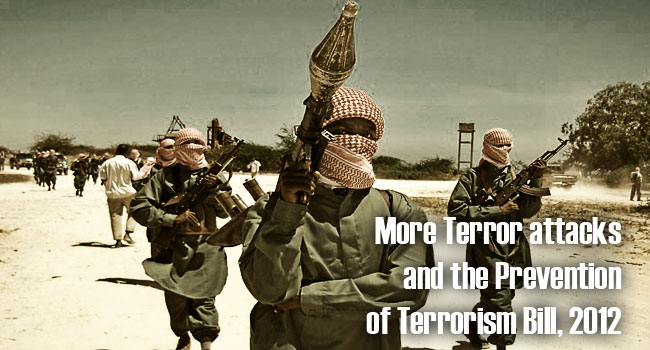 Another Sunday has departed and what remains is apprehension coupled with citizens who are close to complacent to the pattern of mayhem that our country is witnessing. It is barely two weeks since Kenya came to terms with the shocking news that it had lost the Internal Security Minister George Saitoti and his deputy, Orwa Ojode and four others when a helicopter belonging to the Kenya Police carrying them crashed killing them. A week later saw the occurrence of an explosion at Jericho Beer Garden in Mishomoroni, Coast Province leaving three dead and 30 injured.

It seems as though the terror attacks have taken a different turn, targeting congregants gathered in churches. The police force has been deploying officers to man churches especially in North Eastern Province. In the month of May, a similar occurrence was witnessed after a grenade was hurled inside a church in Nairobi's Ngara area on Sunday morning killing one person and wounding fifteen others.

On March 10th 2012, a blast at a bus terminal left nine dead and sixty others injured. In another incident, at least 30 people were injured in an explosion that rocked an exhibition stall next to Mt Kenya University Campus along Nairobi's Moi Avenue street on 28th May 2012.

Kenya has been hit by a series of attacks since late 2011 and the Al-Shabaab militants have been blamed for increased insecurity in Kenya. There is worry that the recent attacks are likely to cause tension between Muslims and Christians.

Currently, there is a Prevention of Terrorism Bill, 2012, that has been prepared by the Internal Security ministry. It is an updated version of the Suppression of Terrorism Bill of 2003 that was withdrawn after meeting hostile reactions from critics who claimed that it was in violation of human rights.

The new law also provides compensation for terrorist victims while people involved in terrorist activities risk being jailed for life and their properties seized. The proposed Compensation of Victims of Terrorism Fund will be funded from disposal of property seized from terrorists as well as fines imposed on those convicted.The Bill also contains provisions that require phone companies to intercept communications in the course of investigations. Banks and financial institutions will also report to the Central Bank, giving details of transactions involving accounts and properties owned by groups or suspects flagged by the government after every three months. Surveillance with the intention of carrying out terror attacks is deemed as criminal under the Bill. For instance, those caught filming buildings and other likely terrorist targets face a maximum of 20 years behind bars.

So far, a section of Muslim religious leaders and professionals are supporting the proposed law. However the Supreme Council of Kenya Muslims (SUPKEM) has opposed the new Anti-Terrorism Bill terming it as 'discriminatory and targeted to the Muslims community'.