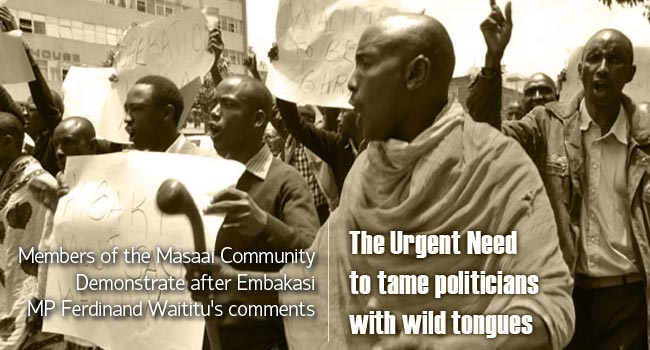 As we are gearing to an election year, more caution should be taken by our politicians to ensure that peace prevails. As they are getting into the campaigning mood, Politicians should proactively promote moderate and reconciliatory voices amongst the public, and discourage inflammatory and divisive politics and hate speech. Politicians should not be allowed to go round the country whipping up ethnic passions; this will result into setting the stage for another round of chaos in Kenya if action is not taken. The 21st August massacre of 48 people in the Tana River district was largely as a result of hate speech from politicians. If the happenings at the Tana region are anything to go by without the exercise of restraint, then 2007-2008 post elections violence was just a rehearsal of things to come. On the premise of this background, stern action needs to be taken to ensure that Kenyans by all means will not go back to butchering one another.

Hate speech, generally refers to words of incitement and hatred against individuals based on certain group characteristics they share. It includes speech that advocates or encourages violent acts against a specific group, and creates a climate of hate or prejudice, which may in turn foster the commission of hate crimes. It often entails inter-ethnic hostility.

Politicians are fond of irresponsible speeches at rallies, meetings and on the airwaves which is a very dangerous trend. Several politicians have been arraigned in court for uttering inciting remarks that may stir violence but no one has ever been convicted. It is very disturbing when a politician makes a comment that is meant to target a particular community; it makes it easier to fuel tensions and conflicts. We must begin to seriously hold people accountable for inciting people to violence and hatred.

Kenya's Assistant Water Minister Ferdinand Waititu has been hitting the headlines for his unique way of doing politics. His confrontational way of politics has often got him into trouble with the police. He recently called for the eviction Maasai tribesmen from Nairobi's Kayole estate, after a teen was found killed in the neighborhood, and he blamed it on the Maasai.

It is within Hon. Waititu constitutional right to freely express himself as the Constitution of Kenya 2010 guarantees fundamental rights including the freedom of expression. However, this right is not absolute, and can be limited when exercised in a manner that violates the rights of others.

We strongly condemn the remarks made by the MP and we call upon The National Cohesion and Integration Commission (NCIC) to take stern action against all leaders that could be misusing their authority by inciting members of the public.

Section 13 of the 2008 National Cohesion and Integration Act, which established the Commission, criminalizes the use of hate speech and bars the use of threatening, abusive or insulting words or behavior in any medium if they are intended to spur ethnic hatred. It defines hate speech as that which advocates or encourages violent acts against a specific group, and creates a climate of hate or prejudice, which may, in turn, foster the commission of hate crimes. Section 62 (2) of the NCI Act provides: ...commits an offence and shall be liable on conviction to a fine not exceeding one million shillings.

National Cohesion and Integration commission is mandated to facilitating operationalization of laws, policies, and practices that counter ethnic, racial and religious tensions. The commission needs to look into the Embakasi MP's remarks and take serious action to deter such irresponsible comments from politicians. The culture of impunity needs to end. Hon. Waititu should be prosecuted.

In societies such as Kenya's the role of political leaders is critical. They need to show maturity and contempt for hate speech. Their utterances should be in ways that are not ethnic in form and content. They should lead by example by embracing patriotism and not profiling people in their ethnic groups.

Kenyans in general should shun hate speech and negative ethnicity by condemning the people who perpetrate such utterances and demand more from their leaders by not burying their heads. We need to ensure that our leaders are accountable and responsible. For peace to prevail we all have a role to play.

The Issues With the New Constitution

Monday, 12 April 2010
Issue No.1: Homosexuality: There have been homosexuals among us, as our brothers, and sons, however, it is a practice frowned upon, and practiced in... Read More...
Adulterated Laws

Friday, 18 January 2013
With only 50 days to go before the general elections are conducted, the aspiring leaders are anxious to overthrow their opponents and as it seems,... Read More...
Religious Attacks in Kenya

Monday, 11 November 2013
Insecurity is not a new phenomenon in Kenya and the world as a whole. Kenya has so far had its share of insecurities, both from internal and external... Read More...
The ICC Update

Thursday, 01 December 2011
International Criminal Court is keen on tracing and profiling the assets of the six suspects charged with committing crimes against humanity... Read More...