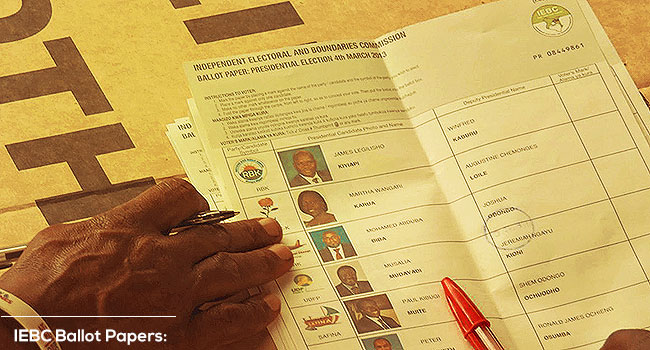 Late last year, the Coalition for Reforms and Democracy (CORD) filed a petition at the High Court to challenge the Independent Electoral and Boundaries Commission’s (IEBC) decision to award a contract for printing ballot papers to Dubai based Al Ghurair Printing and Publishing Company.

After the disputed 2007 general elections, an Independent Review Commission on the General Elections was established under the stewardship of Judge Kreigler. According to CORD’s submission to the Court, the Kriegler Commission found fault with every aspect of Kenya’s electoral system and process. This included the registers, registration of voters, voting, counting of votes and the transmission and tallying of results. Overall, the Krieglar Commission’s report recommended the use of technology in our elections.
Since then, the debate and campaigns for electoral reforms led to a Joint Parliamentary Committee report that was approved by both Houses of Parliament and was made into law through the Election Laws (Amendment) 2016 Act. This new law restricted the manual processes and components of Kenya’s electoral system.

CORD argued that the amended electoral law required a register of voters that would capture the biometric data of a voter. This was to include unique identifiers and attributes such as fingerprints, hand and earlobe geometry, retina and iris patterns, voice waves and signatures. According to CORD, in contrast, the forms ordered, may not have had synergy and conference with the integrated electronic system as required by law.

Justice George Odunga in his verdict held that the tender, which was awarded to Al Ghurair Printing and Publishing Company, had failed to comply with the amended Election laws 2016 and the integrated electronic electoral system as established by law. Consequently, he directed the IEBC to re-start the tendering process again in accordance with the law regulating the supply and delivery of ballot papers for election, election results, creation forms and poll registers. In quashing the tender process, he stated that IEBC ought to have taken into account the current legislative framework.

Justice Odunga further ruled that that the court would not authorize an illegal process and that the fact that the public stood to lose funds already paid as commitment fees was not enough to allow the contract to proceed. He further pointed out that IEBC was not properly constituted at the time it awarded the contract on November 30, given that an amendment to electoral laws had already come into force. It was the Court’s finding that there existed a vacancy for commissioners including the chairman by the time the contract was signed. Consequently, the court ruled that an empty office cannot make decisions since they ceased to be commissioners on October 14th last year when the new laws came into being.

The IEBC has warned that it is racing against time in its preparations for the August 8th elections. The Commission contends that while it is obligated to procure and put in place the technology necessary to conduct the general elections, numerous court challenges will impede it from carrying out its constitutional mandate. It argued that the Court owes Kenyans a duty to ensure that unnecessary obstacles are not allowed to prevent the IEBC from preparing for and carrying out the General Elections. However, the commission assures Kenyans that it will do everything possible to ensure that credible elections are held.