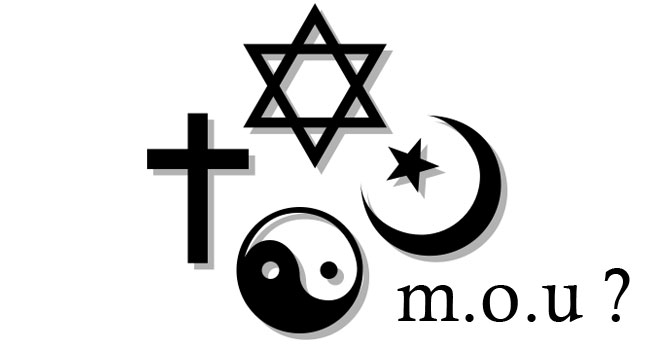 It has now become commonplace for politicians to make deals with religious groups in the run up to elections. During the recent cabinet reshuffle, some religious groups were enraged by the sacking of "one of their own" citing it as a betrayal to an M.O.U signed prior to the previous election. They also claimed that they should have been consulted prior to the sacking.

First, this begs the question; in what capacity do ministers and other public appointees serve? Is it as servants of the republic or as members of their religious groups? The answer to that question is rather obvious, therefore making those claims by the religious leaders to be quite ridiculous to say the least.

The said leaders went ahead to "nullify" the agreement and promise to marshal their people to defend their cause in the next election. Which begs the second question, was the agreement even legal to begin with? Article 8 of the constitution declares that there shall be no state religion and thus the making of such agreements is void, or at least should be!

Individuals seeking political office should strive to represent the rights of the entire populace. Giving in to demands of a particular religion be it Islam, Christianity, Hinduism or any other would amount to betrayal of the other religions. Put into perspective, this is not too different from entering into agreements with tribal outfits in order to gain votes. It is strange how some individuals call themselves national leaders when they seek to promote partisan interests. Cabinet and other government positions are not given out on the basis of religion but rather merit.

Granted, majority of Kenyans belong to one religion or the other and their religious beliefs must be held sacred.

The formulation of government policy on the grounds of agreement with a certain religion is basically betrayal of the trust handed to the appointing organ to be representative of the entire Kenyan population. It not only applies to appointments, but to the general handling of government policy.

The making of memorandums of understanding and other agreements between religious groups and aspiring leaders is an outdated practice. This is basically the same type of agreement that is being used by outlawed groups in seeking for cessation.

Being as this is a campaign period it is highly likely that politicians will strive to endear themselves to the electorate, but making secret agreements and making promises such as "I will give you a flag" do not work well for good governance let alone national cohesion. Soon religious leaders will be using such agreements as powerful bargaining chips in order to leverage votes.

Monday, 06 October 2014
Pastor Saeed Abedini is in prison in one of Iran's toughest prisons. He is serving an 8 year sentence because of his Christian faith and the fact... Read More...
Religious Persecution in Ethiopia

Friday, 14 September 2012
The country's population is largely Christian. Though this may be the case, several instances of persecution directed towards Christians have been... Read More...
Islam In Africa

Thursday, 03 June 2010
Islam in Africa, the development of the Muslim religion on the African continent. During Muhammad's lifetime a group of Muslims escaped Meccan... Read More...
Churches Burnt In Tanzania