Kenya is at Crossroads... 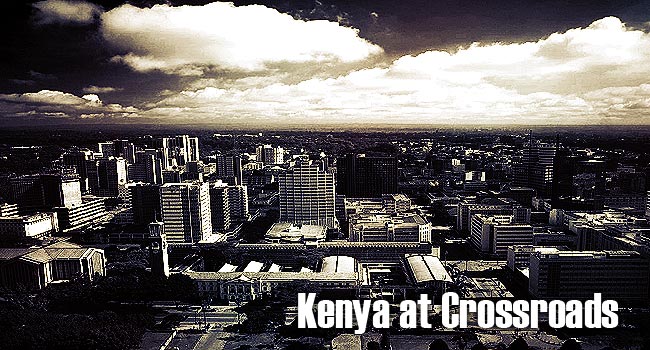 Every society begins with a group of individual coming together and deciding to be organized. They decide to be bound by a certain code, and sometimes even to be governed by a one among them to maintain order. As the group grows, so do the views expressed in the groups, the people who intend to govern the others also get different views on how the society should be run, and this festers sometimes into animosity. Then someone came up with a word called "Democracy" where people are to suggest who they think would make good leaders, and then everybody who cares to be heard puts in their two cents worth of opinion into the conversation. The one who emerges with the most two cents, is declared the winner and therefore the governor.

I know this is a very simplistic synopsis of how our societies are created, arranged and propagated. However, my point in all this is simple. In Kenya our origins are a bit different. We had kingdoms and chiefdoms that were living side by side with each other. People spoke their different languages and they had their own government. But in the late 17th Century, explorers came and "discovered" the treasures and pleasures of this vast land known as Africa. They went back home and told all who would care to listen about it. Investment Companies were formed and given Charters to come and explore the land and bring people out from the then considered overcrowded European Countries, and help them settle here in vast Africa. What happened by mid 18th Century was colonization. Under colonization, the fabric of how our societies were then organized was irreversibly altered. Opposing societies, historical enemies were made to become part of one nation. Societies were split into two when an imaginary line called a boundary was drawn between them. New entities came in and decided how, when, what the societies would do, making many helpless, since they could simply not grasp this new way of life.

Fast forward to the 20th Century, and we have modern day Kenya. It is made of at least 52 different societies. It is also a poster child of harmony, peace and stability for the longest time. Until we arrive to the 21st Century, and by now politics has "matured" in Africa. This means simply that we have completely discarded our former societies and are actively trying to come up with one united society. However, the events of December 2007 and early 2008 reminded us, that within us, those societies still remain. The pull of the former allegiances, despite our best efforts remain a strong under current suppressed only by our need to believe we are one, but when need be, then the current can override our nationhood. There are those who were surprised by the veracity and the velocity of this under current. There are those who thought it was about time our true colours came out for all to see.

Kenyans decided they wanted a change in how they were governed. They believed the problem was that the Constitution gave the governor too much power that if used correctly could greatly benefit the people, but when used capriciously, was a tool of great oppression. They were right of course. When the colonialists were leaving, they handed the country over to the new governors under a negotiated instrument called a Constitution. This was the new social contract between the governor and the governed. We flourished under this extensively negotiated instrument for all of two years. Once the new indigenous governors were in place, they took it upon themselves to alter the negotiated document into one that suited them, and had no negotiation with the governed. This is how we lost our regional governments. This is how we lost autonomy over the land in the area where we lived. This is how we lost the practice of the leader serving the people, and we went back to having a sovereign and subjects. The first President and founding father of our nation was a man who used this to good effect to consolidate his position. When he rested, the successor was a benevolent leader until 1982 when someone tried to overthrow him, and he too, adopted the same tactics of an iron fist that his predecessor had used.

When Kenyans decided they needed a review of their constitution, they did not know that this was the golden opportunity for yet another set of opportunists. The first set was the early independence ruling class. This set is even more dangerous, because they are domiciled among us pretending to have our massive interests at heart, but they are actually working for interests outside our realm of understanding. The civil society is a tool that has twin sides. On one side they dig wells, and educate our children and feed our dying masses. On the other hand, they play dangerous games in politics, with tactics such as lobbying, technical assistance, grants and awards, and other means of persuasion to tell us we must think a certain way, and any other way is taking us back to the dark ages. Instead therefore of constitutional review, we ended up with a brand new NGO constitution.

That is why Kenya is at cross-roads. There are many things that are in our "new" constitution that will shake this society of ours to its very core. There are truths we have had over the years that under this new dispensation will now not hold true. There are things we never thought we would see on our land, which will now become common place. I find myself being right smack in the middle of all this. I was living my life minding my own business when all this happened and now I find I cannot keep silent. I cannot watch as the society I grew up in degenerate into something barely recognizable. I cannot watch as our leaders refuse to learn from the experiences of those who have traveled this road before us and found it to be disastrous, and just let them lead us down the same mine shaft.

Kenya is at cross roads, and indeed I am too. I can choose to mind my own business and keep my corner clean, or I can choose to get equipped and to become a warrior. I may not save the world, but like the brave 300 Spartans who fought the great battle against the Persians, I can die keeping the enemy away from my motherland long enough to help reinforcements organize themselves and come to the aid of many.