The Vetting of Judges 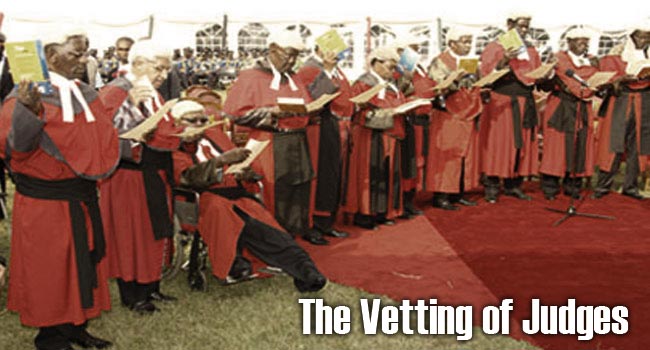 "Vetting", that's a word Kenyans have gotten used to over the past year. Vetting of commissioners, Supreme Court judges, attorney general... basically everyone has become the norm. For the most part, specialized commissions and boards conduct the bulk of the vetting process. These men and women strive to ensure that the public gets efficient, capable and incorruptible individuals as their servants. They may not get it right all the time but their appointments are far better than those in the era of political cronyism, tribalism and nepotism. The commissioners would also be better placed to have a professional view on the profession at hand as well as special interest groups.

The saga regarding the vetting of judges has been ever present in the media lately. This is especially after the court order that barred the process for a while. Now, if there is a group of individuals that Kenyans would want vetted, it would be the fine ladies and gentlemen of the bench. The radical "surgery" of the judiciary that took place, with much fanfare (as well as sadness for the individuals shamed in public), a couple of years ago, has obviously failed to get rid of the rot in the judiciary. There are still widespread complaints of corruption in the judiciary as well as complaints of incompetence, intolerance and favoritism from the legal community. In the words of its head, Chief Justice Willy, it is "...an institution so frail in its structures, so thin in resources, so low on its confidence, so deficient in integrity, so weak in public support that to have expected it to deliver justice was to be wildly optimistic. We found a judiciary that was designed to fail..."

It has to be said however, that all is not bleak in the judiciary. Confidence of Kenyans in the judicial system has been on the increase since the enactment of the new constitution and the ongoing reform process. This can be demonstrated by the sheer number of cases being brought before the courts, especially those of a constitutional nature. Indeed the very case that brought a hold to the vetting proceedings was as a result of the new found vigor.

Looking at the case, I do believe it had its merits even though the ruling was against the petitioner. The fact that the judges and magistrates have no avenue of appeal is fundamentally against their rights under article 50 and 168 of the constitution. However, the court has stated itself on the matter and the vetting has begun.

It has been a cause of controversy whether the hearings should be held in a public gallery or in private sittings. The first such hearing of Justice Riaga Omollo was a private one as per his request under the magistrates and judges vetting Act. Such requests are reasonable as these are individuals of high standing whose reputation and standing may be affected should they face a public grilling whether or not they are re-instated. This would ensure that their standing in court would not be dented by a grilling that might expose unsavory details about them. It is fair to say that the vetting board is quite competent to perform its tasks diligently and without fear or favor. Kenyans have complete trust in the board and its ability to get the job done. Should a judge or magistrate want to have a public hearing, it would be prudent to let him have it.

Therefore Kenyans should get behind the vetting process as it is a process that is good for accountability and integrity in order to clean up the mess that is the judiciary.