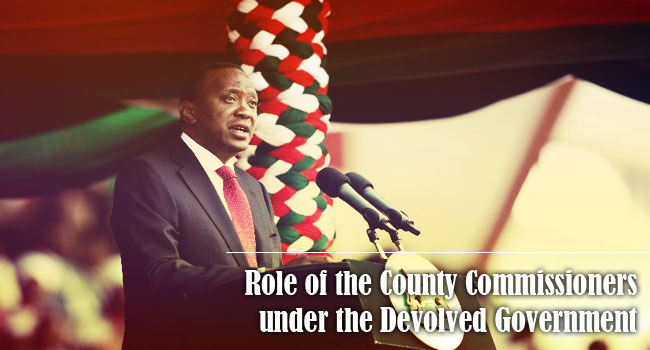 Kenyans officially celebrated 50 years of independence on 1st June 2013. The celebrations, which came at a time when the government is working hard to ensure that the Constitution is fully implemented, were graced by President Uhuru Kenyatta and other dignitaries.
President Uhuru gave a directive that has since resulted in a dilemma in the political arena. In his speech, the President recalled all Provincial Commissioners (PCs) now known as Regional Commissioners, as well as the heads of other departments in the former provinces for reassignment to other duties. This bid was aimed at restructuring the provincial administration; even as Kenyans look forward to the decentralization of power.
This is in accordance with Section 17 of the sixth schedule of the Constitution states that: "Within five years after the effective date, the national government shall restructure the system of administration commonly known as the Provincial Administration to accord with and respect the system of devolved governments established under this Constitution".
The President's directive comes at a time when there has already been a battle between the County governors and the County Commissioners, jostling over who wields more influence and which office holds more power. This move has not been spared of opposition and Governors have termed it illegal.
Earlier, former president, Mwai Kibaki appointed 47 county commissioners to carry out various national tasks in the already established counties. This was aimed at coordinating the national government functions at the County level.
The distinct functions of the commissioners include coordinating security management; coordinating national government functions and delivery of services; facilitating conflict management and peace-building; mobilizing national government agencies for national events, and programs.
Consequently, the constitutionality of these appointments was challenged in the High court, as the Court declared the appointments invalid and further deemed the move as unconstitutional, stating that the President cannot make appointments to positions that are nonexistent. However, following an appeal against this decision, the Court of Appeal overturned the High Court's decision and upheld the appointments adding that under Article 6 of the Constitution, former President Mwai Kibaki was obliged to ensure that the services offered by the Provincial Administration were devolved to the 47 counties, pending the enactment of legislation to provide for restructuring of the system.
The High Court's revocation of the appointments was ignored and the officers commenced their duties.
Rather than frustrating the objects of devolution, top government principals need to uphold the Constitutional spirit behind devolution. There should not be a tussle to achieve partisan interests.
The role of the commissioners in the devolved government should be clear-cut and should be in tandem with the Objects of devolution so as to ensure that there is no conflict of interest as we endeavor to realize devolution.

Monday, 27 February 2012
BY Phoebe The implementation of the new constitution has so far not been as easy and immediate as many had anticipated it would be. Many Bills have... Read More...
Devolution (Implementation and Challenges)

Wednesday, 26 October 2011
Characteristics of Devolution Two or more levels of government established by law Coordinated yet none is subordinate to the other/ none is an agent... Read More...
County Government Amendment Bill: A Blessing or Curse?

Monday, 14 October 2013
Devolution has been a contentious matter both in government and around the country for a while now. One of the key issues out of it is of the County... Read More...
Supremacy Battle Between the Senate and National Assembly