The Scope of Religious Persecution in Kenya in the recent past 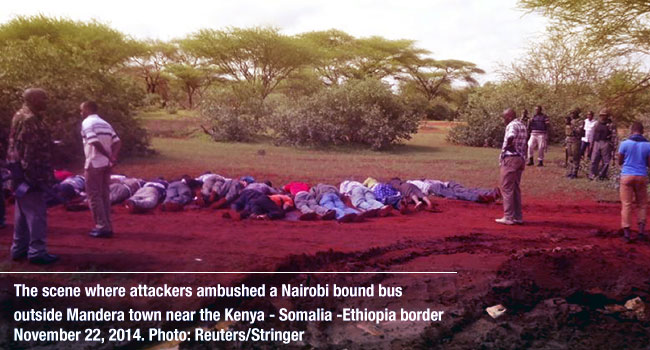 The Kenyan constitution prohibits religious discrimination and protects religious freedom, including the freedom to manifest any religion or belief through worship, practice, teaching, or observance and debate on religious questions. But it is evident that in the past three years, the level of religious persecution in Kenya has kept growing and it is likely to continue that way.

The constitution stipulates there shall be no state religion and prohibits religious discrimination. It provides for freedom of religion and belief individually or in community, including the freedom to manifest any religion through worship, practice, teaching, or observance, and states individuals shall not be compelled to act or engage in any act contrary to their belief or religion. The constitution requires parliament to enact legislation recognizing a system of personal and family law adhered to by persons professing a particular religion

In the past few years, the Somalia-based terrorist group Al-Shabaab carried out attacks in the counties of Mombasa, Mandera, Garissa, Wajir, Lamu, and Tana River and said it had targeted non-Muslims because of their faith. In Lamu County, al-Shabaab claimed responsibility for at least 65 deaths, with some witnesses reporting the terrorists asked the religion of victims, killing non-Muslims.

In Mandera County, Al-Shabaab claimed responsibility for the killings of 28 people in a November 2014 attack. The attack occurred near Mandera as the bus made its way toward Nairobi. The hijackers demanded the 60 passengers aboard recite the Shahada, a tenet of Islam, (Agence France-Presse reported). The 28 individuals -- 19 men and nine women -- who were unable to recite the passage, were shot to death.

Religious tensions were high in some areas of the country. For instance, in the Likoni suburb of Mombasa, armed men opened fire on a Sunday as worshippers at a church, killing six and wounding more than a dozen. Some Muslim groups threatened individuals, especially those of ethnic Somali origin, who converted to Christianity.

During a series of terrorist attacks in Lamu County and Tana River County, multiple reports stated attackers specifically targeted non-Muslims. An unknown number of individuals who identified themselves as Christian or who were unable to speak Somali were killed. On June 15, the terrorist organization al-Shabaab claimed responsibility for attacks that killed more than 65 people in Lamu County

On March 23, 2014 gunmen entered the Joy in Jesus Church in Likoni, a suburb of Mombasa, and opened fire with assault rifles on Sunday worshippers, killing six individuals and injuring more than a dozen. The attack was widely interpreted as a direct attack on the Christian community and generated significant tension between the Christian and Muslim communities in the city. In the wake of the attack, media organizations and NGOs reported police detained between 50 and 100 individuals, mainly young men with Somali features, charging them with offenses such as idleness.

In the year 2014, and in the subsequent years the U.S. embassy regularly discussed issues of religious freedom and inclusion with government officials and local and national religious leaders. The embassy in their International Religious Freedom Report for 2014 urged religious leaders to engage in interfaith efforts to promote a continued commitment to religious freedom and religious diversity and supported interfaith efforts to defuse political and ethnic tensions. The embassy encouraged religious leaders to work together across sectarian lines to advance tolerance and peaceful coexistence during police operations in Nairobi and Mombasa, and after repeated attacks in the coastal region

Christian leaders have in the past stated that individuals and businesses in historically Muslim areas in the northeast and on the coast discriminated against Christians. Christian leaders also said private citizens made it difficult for Christians in the northeast to obtain land for churches and cemeteries. Interreligious NGOs such as the Inter-Religious Council of Kenya stated that with few exceptions Kenyans respect religious diversity and are able to exercise freedom of conscience and religion.

In all the attacks highlighted above and those that have not been mentioned, it is clear that if Al-Shabaab were to be defeated, this would reduce the level of violence against Christians in the northeastern and coastal regions. With Kenya’s general elections just a few months away, the outcome of which will have a profound effect on Christians in the country, especially those who live in northeastern and the coastal regions as they are the most vulnerable and any major political crisis in the country would have a big impact on them. This is mainly because if major political crisis happen, the Northeastern and Coast region will be without adequate security personnel, as the government will pull its sources to the center.