The Current State of Security 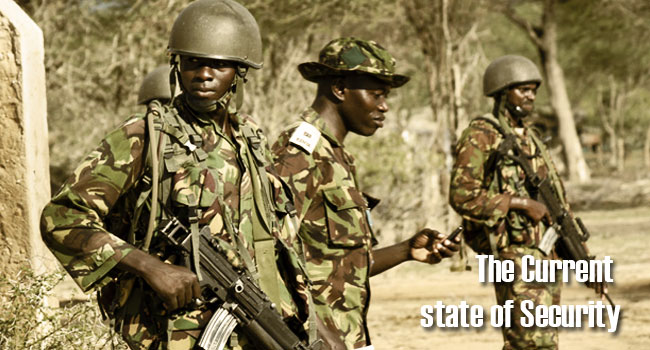 In the wake of the incursions that Kenya has been facing, security measures are being tightened throughout the country. Since the inception of Operation Linda Nchi various military activities have been continuously taking place including the joining of forces with African Union Mission in Somalia (AMISOM) in a bid to see Al-Shaabab relinquish their terrorist activities. We cannot fail to mention the range of attacks that have been waged against Kenya which have occasioned deaths and injuries. Currently, the Kenya Defence Force is seeking to secure some key towns in Somalia from militia control as it advances towards Kismayu. These include Jilib, Aglibha, Buula Haji, Bardhere and Bibi. This is in view of the ongoing war against the Al-Shaabab. AMISOM (African Union Mission in Somalia) is said to have the last word that will decide on whether to strike Kismayu.

In retaliation, Al-Shabaab fighters have resorted to using Improvised Explosive Devices (IEDs) planted in various places in the country. The KDF is soldiering on in spite of the challenges encountered.

Al-Shabaab's latest stance is to try and wage a religious war by rallying the people of Somali to battle against the Kenyan forces who they now accuse of spreading Christianity in a country in which Islam is prevalent. The KDF deny this. The controversy of religious intolerance emerges to a substantial extent and this should not be overlooked as it may be the small leak that might sink a great ship.

With the demise of the Internal Security Minister and his assistant, a huge gap that needs competent persons to fill it up is left. These are key positions which touch on very crucial aspects that currently affect the government and the country as a whole. This includes Kenya's military operation in Somalia, the threat posed by the Coast to secede from the rest of the country and attain self governance and the requirement of a peaceful election. The police, National Security Intelligence, Provincial Administration and Government printer are under the umbrella of this Ministry.

The two had identified terrorism as the main challenge that the government is facing as it gets ready to face the next general election. They also affirmed that the government had put in place all necessary measures to secure the country during the polls, though terrorism continuously posed a major threat. This might influence the conduct of peaceful elections. They continuously called upon the backing of Kenya's foreign counterparts including the international community. Being a global challenge, terrorism should not be viewed lightly.

Due consideration ought to be given by the government to ensure perpetual peace and tranquility in the nation and to safeguard democratic processes that will uphold the rule of law. As such, it is the government's business to ensure that various strategies are implemented or executed to expel any doubts or fears that may be looming. Community policing cannot be dispensed and Kenyans are advised to report any suspicious incident. All in all Kenyans bear the burden of continuously remaining vigilant in the war against terror and not to condone related incidents or behaviors' as well as anything that would trigger aggression within the country. The last thing in the country's wish list would be to have a re-occurrence of the 2007-2008 post-election violence. Let us endeavor to uphold the words in our National Anthem "na tukae na undugu, amani na uhuru."